Elab was established in 2012 in Warsaw, Poland, by two young entrepreneurs who had studied overseas and wanted to help other students enjoy a similar international experience. Elab is still a young and dynamic company, now with offices in Warsaw, Milan, Rome and London, placing students in universities or high schools across the UK, US, Italy, Netherlands, Denmark and Germany.

Currently, the company is run by Tom Ravensdale, the major investor, a Chartered Accountant of British origins, who grew up in Southern Africa, qualified in South Africa and worked in London before moving to Warsaw.

The Milan and Rome office and Italian operations are run by Davide Quinto, an Italian who travelled extensively with his entrepreneurial parents as a young child, studied at Cattolica in Milan and completed his studies in law at University College, London.

The London office is run by Sylvia Mejri, who was born in the UK. Sylvia has a Politics degree from Bristol University and has contributed articles to national and international newspapers and is a published author. She has taught English abroad to government ministers and directors of multinational companies as well as UK prison inmates under governmental rehab programmes.

To date, we have submitted over 7,000 successful student applications to the universities of their choice. We are proud to boast that now almost 1,000 of those students were accepted by top-tier universities, namely: Oxford, Cambridge, Harvard, UCL, LSE, CASS, Chicago, Penn State, UCLA, and many of the leading Russell Group universities. These numbers continue to grow year on year.

Annually, Elab runs the largest education event in CEE for students, parents, universities and schools. We are expecting over 4,000 registered visitors at this year’s Elab Education Expo.

Best Study Abroad Consultancy 2020
The Education & Training Awards 2020 aim to award all institutions, organisations and agencies who make the education of our societies their priority. This year award for Best Study Abroad Consultancy 2020 goes to Elab Education Laboratory.
Best New Agency in Europe
The best global educational agencies were invited to attend the Navitas Group's Annual Conference, which took place in Istanbul. Elab Italy was both nominated for, and won, the award for Best New Agency Europe and was the only Italian agency singled out in the educational sector.
University of the Arts London Official Representative
Official Representative of University of the Arts London
Read more
Previous
Next 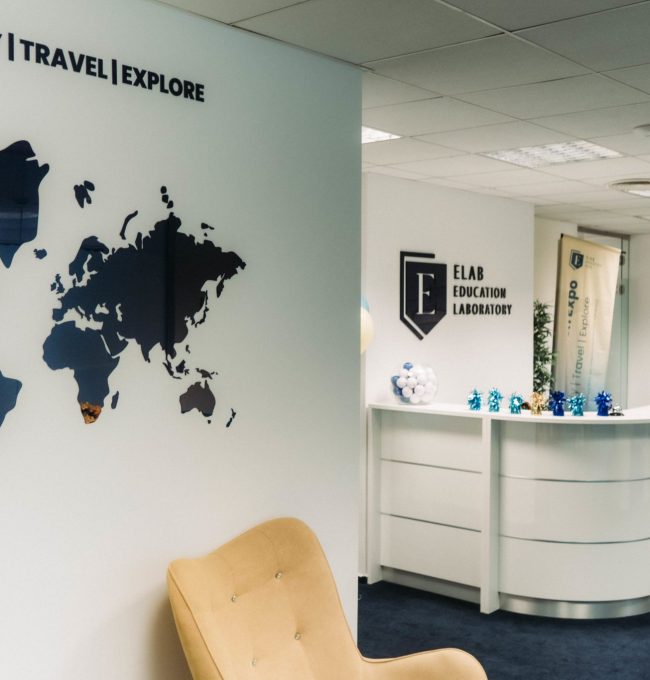 We also work very closely with the more progressive teachers and schools by way of providing training and presentations on studying abroad. It is a complex subject and extra-curricular, but something students need to be aware of and consider. Our consultants travel from city to city visiting schools, attending educational events, and meeting students. Please contact us for more details. We are happy to help your school and your students to maximise their potential!

Request a speaker for your school

The Elab Education Laboratory is offering your school a one hour visit from a member of our staff. Please give details about the age of your students so we can tailor the talk.

Elab has experienced mentors in over 100 universities in Europe and North America!

Pasan Fernando - Medicine, University of CambridgePasan is a 6th…

London College of Fashion, University of the Arts London

Maria Gemra - London College of Fashion, University of the…

Call us and discover how to get into the top schools and universities.